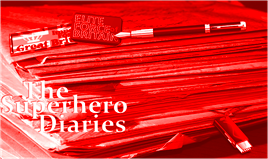 The current time-flux disturbance is wreaking havoc with the Ultimate Superhero Team of all time, the Elite Force of Britain.

Muriel Magnificent was mortified to find that one of her early ‘blog’ (diary) entries that she’d made back in 1983 on her then new Commodore 64 had been posted on her current blog. The strange thing is the Commodore 64 was never connected to the internet, and hasn’t even seen the light of day since 1987.

MONDAY 21ST FEBRUARY 1983
I awoke at 9.15am with a strange screeching sound outside. I looked out of the window, only to be confronted by three odd spinning discs, one red, one yellow and one blue. They were all the size of dinner plates, and they seemed to be hovering just outside my window.

The road below was clear, which also was unusual for that time on a Monday morning. I needed to investigate what these discs were first, and that, I thought, would give me a clue as to why it was so quiet.

I looked around my bedroom to ensure nobody else was around – that is a check everyone must do to protect their secret identities wherever they are – and then I changed into Muriel Magnificent.

There was no need for me to leap out of the window, as the discs were hovering exactly where they were, no movement from them at all apart from the spinning.

I left through the back door, and flew into the back neighbour’s garden to make it appear as though I hadn’t just come from my house, and then took off again into the sky and onto my roof. Then I leapt off the roof and grabbed hold of the blue spinning disc.

That was my first mistake. The disc spun me around like a fast horizontal air-borne whirling dervish. I had to let go, and was flung across the road and onto my brand new Austin Metro, denting the bonnet. I was not pleased with that, but had to pretend that the car wasn’t mine.

The noise the discs were making as they spun was deafening, so I reached into my bag to get some cotton wool to stuff inside my ears. As I looked up again, just in time, the yellow disc had left its position and was hurtling toward me at great speed. Its intention was to take my head off. I managed to bat it away with my handibag with mere seconds to spare, and fortunately for me I knocked it back into the blue disc, splintering both of them into thousands of pieces that rained down like a multi-coloured snowstorm.

And it seemed redder. Angry, in fact. Being in the superhero game, you just know when things take a turn for the worse.

The red disc started zigzagging across the road, up and down. It was also firing laser beams in all directions, which weren’t causing too much damage but I had the feeling they were probably hot. I wasn’t going to get rid of this one as easy, I thought. I needed to get myself somewhere safe, hoping that the disc would run out of whatever power it was operating on.

I got into the nearest safe haven I could find: my car.

To me, it looked as though the disc was disorientated. It hovered up and down the street, as though it was looking for me. It stopped firing the beams as soon as I was inside the car.

I watched it as it hovered, and started to pulsate brighter and dimmer.

It then fired a series of laser beams at high speed down to one point on the road, just by the zebra crossing. It than took off into the sky at great speed.

I waited for a few seconds before getting out of the car, and then saw that it had left a message for me: We will be back for you, Murial Magnificent. The V.

I have no idea as to who this V are, but I was devastated that they’d spelled my name wrong.

I checked the time, and it was 9.45. Half an hour I’d spent dealing with this unknown assailant when I could have been having a lie in. I was due to start work at 10.30, so decided it was time for me to get ready, I made a mental note to be ready for their return.