The grandfather clock ticked twice as usual, before tocking. Both Shawns, the cats, were fixated on something on the wall beside the clock. They watched intently, well… nothing. Reg watched them as he ate a ham sandwich. The familiar sound of ‘Always look on the bright side of life’ alerted him of an incoming call on his mobile. He looked at the display, and it was his old friend Monique DuPont. He answered the call, and Monique filtered her way through the airwaves to arrive in his living room.

“Monique!” Reg said, startled. “Come in, why don’t you! You know you don’t need an invite!” The cats paid no attention, and continued looking at the wall.

“Is this still Bridge Lane?” Monique asked, quite flustered.

“Erm, yes it is. Why do you ask? You’ve been here hundreds of times.” Reg offered Monique a sandwich.

“Good.” Monique appeared to ignore Reg’s question, but took the sandwich. Once she’d finished eating she began her tale. “The other day, I was performing a spell when a bright orange portal opened up – in my own living room, I must stress – and a red-skinned demon appeared to me. He wanted my Candlestick of Kabbabooga.”

“Not the Candlestick of Kabbabooga!” Reg took another bite of his sandwich.

“The very one.” Monique went on. “Well, I gave him my Candlestick of Kippikakka instead, and he was swallowed up again by the orange light.”

“So you tricked him? You gave him the wrong item?”

“Have I seen the Candlestick of Kippikakka? Under the Walled Protection spell?” Reg was puzzled. “Doesn’t the Walled Protection spell cause the object it’s protecting to be invisible? If it’s invisible, how could I have seen it?” He thought for a second. “And what happens when the Candlestick of Kippikakka has been outside of it’s sphere for too long?”

“Ooh, you don’t want to know.” Monique said, in a deep voice.

“Ooh, but I do!” Reg replied, in an even deeper voice.

“It will merge time. Everything will become now. The past, the present, the future will all be squished into one moment… us with it.”

“You’re right.” Reg said. “I didn’t want to know that. Isn’t it the same with the Candlestick of Kabbabooga?”

“Well, the Candlestick of Kabbabooga affects reality and time – but as long as one of the candlesticks is within the protective sphere it cancels the effects of the missing candlestick. Unless the wrong hands get it, and they know how to tap into the power.”

“So what made you give either of the candlesticks away in the first place?” Reg was bothered.

“That was why I was casting my spell. To further protect both candlesticks, but something happened. I felt myself split in two, literally. My dark side just vanished in a moment. I was flustered. The red man appeared and I just gave him what he wanted. And he was a demon. Have I said that?” Reg nodded.

“Your dark side? You have a dark side?” Reg couldn’t see anything dark about his friend.

“Oh yes. I keep her well hidden, my dark side. I usually utilise her when I need to do administrative duties. I call her Monique D’Arkness. And the demon totally zapped my concentration.”

“So your missing dark side knows how to use your missing candlestick?” Reg was becoming more concerned. “Could she have sent the demon?”

“Oh yes. More than likely. She also knows how to use my magicks, so you could say her hands are very wrong. Hence I need the Candlestick of Kippikakka to hopefully stop some of the damage.” Monique looked at both Shawns. “What are they looking at?”

“They go off into their own worlds at times, Monique.” Reg finished another sandwich. “Can’t you just bring down the Walled Protection spell?”

“I did, but the cancellation spell was blocked by another wall.”

“The cats!” Reg said. “They’ve been watching the wall by the grandfather clock for a couple of days. I bet that’s where the Candlestick of Kippikakka is.”

“Sorry, Reg!” Monique sent forth a burst of magical energies which tore open the wall. Both Shawns fled behind Reg’s sofa. The Candlestick of Kippikakka shone brightly through the hole in the wall. Reg walked over to it, and handed it to Monique. “Well, you certainly brought that wall down with ease!” He sighed.

“At least I have the Candlestick of Kippikakka back now. I’ll get it to my place and within its protective sphere straight away. Hopefully, its cancellation effect will reach beyond the sphere and stop my dark side from doing whatever she wants with the Candlestick of Kabbabooga.”

“If she’s got it, that is.” Reg held up his mobile and dialled Monique’s landline telephone number.

Monique started to dissolve into the airwaves again as she said “Oh, she’ll have something to do with it, I’m sure. I hope I’ve left my answering machine on!”

Reg sighed and tucked into another sandwich. Both Shawns emerged from behind the sofa and stared at where Monique had been sitting. 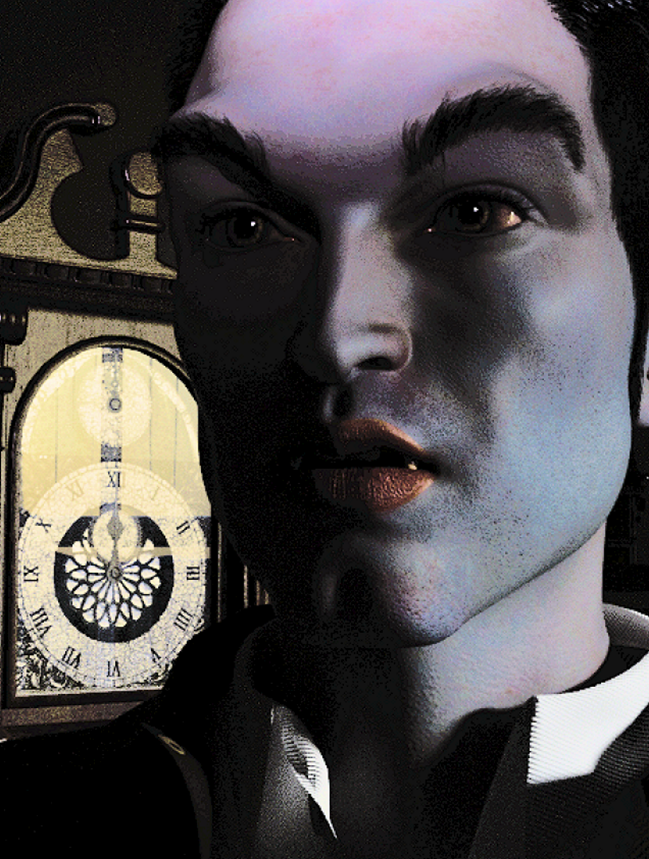 It’s been over eight years (give or take) since Reg the Vampire last appeared on this blog. The Sinsters certainly like to travel through time!

Previous parts of the Sinsters’ mission are here: