Melusine is a fresh water spirit from legends in France, Luxembourg, the Netherlands, Belgium and Cyprus. She is sometimes seen with wings, one fish tail or two. She was a fairy queen who had to take on the part serpent form every Saturday. She was a hard-working soul, building many castles each and every night throughout the night, and with her human husband had many children. The unfortunate thing was that all of these children had some sort of odd defect, one with different coloured eyes (red and blue), another with one ear larger than the other, one filled with murderous rage and others. She never wanted her husband to see her on a Saturday, which he agreed to, but one day he did. He thought it was because of her serpent side that all of the children were as they were. Devastated that her husband had gone against her wishes and saw her in her Saturday form, she turned into a huge serpent and eventually flew away… visiting her children at night and leaving her husband. He was never happy again.

The legend continues as it is said her descendants became some of the region’s great leaders, including Eleanor of Aquitaine, Queen consort of France and England.

And she is still seen today – if you notice the Starbucks logo… that’s her on the image.

My ATC, another very quick one so not much time for great detail, shows her in her one-tail form, flying out of a fresh water lake. She was created using pastels, gel pens and gold and silver markers, as all of the others have been in this series. I think the image looks better on the actual ATC than it does in the photographs, as the glitter in the gel is reflecting back the light of the flash, and this isn’t as noticeable on the 2.5 X 3.5 inch picture. 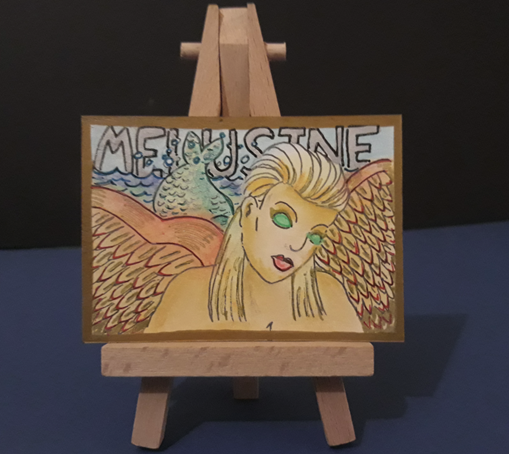