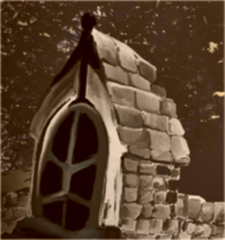 Well, this is different, it must be said!

Here I am, outside of the window – the roof window that is – of the extra part of the Mansion that was revealed a few weeks ago.

Just to fill in, very briefly, odd things happen around here regularly; and recently there was an earthquake that revealed an extra part of the Mansion out in the Grinds (also known as the ‘grounds around the Mansion’)… The top part of a sub-terranean annex was unexpectedly revealed.

I’ve decided to explore this new Room tonight, as for one, it’s a spooky night, and as for two, well, why not? A live exploration on Halloween always has a special pull!

The weather’s a trifle odd tonight. Slippery surfaces in some places, dry in others. Warmish with a cold edge. Otherwise known, aptly for Halloween, as chilly.

I’m sure I’ve seen the Moon somewhere up above, but I can’t find it right now. It isn’t exactly dark yet, but the Moonlight may come in handy later. Twilight’s always a good time!

I have with me my mobile phone, so I can update my blog and take photos on a regular basis. I may not be able to reply immediately to comments tonight (if you leave any!) but I promise I will eventually. I also have with me a manky old rope ladder from the Cellar, which I’ll use later to lower myself into the Room. A basket with a flask of tea and a couple of fireworks has been provided for me to take with me when I go, and in my rucksack I have a couple of butties and slices of Victoria sponge.

I’m about to open the window and step inside this newly revealed realm.

I’ll report back later with what I find…