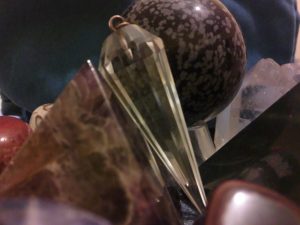 I own quite a few crystals, several sets of oracle cards, a few packs of tarot cards, a set of runes, a couple of crystal balls and a pendulum. So I believe in the power that is available to be tapped into in the universe.

I have performed several spells that have provided me with the results that I needed at the right time, so I believe in the power of magic.

I have had many a cosmic order delivered to me, again at the right time, and these too have given me the belief in that I can achieve what I really want to, as long as my mind and my intention is correct.

Sometimes, I hold my pendulum and imagine positive energy from the universe cascading through me, and all over me. When I do this, the pendulum always spins around. I hold the pendulum in my right hand, and hold my left hand palm up underneath it. As I imagine the positive energy, the pendulum seems to gather energy all of its own, and I can feel the force of it as if it is trying to pull itself away from my fingers. This feeling is amazing, as the energy from the motion of the pendulum is adding to the energy I am imagining cascading through me, and they seem to intensify each other. It is a very strong force that is doing that, and it is not me that is physically causing the pendulum to spin in the first place, although something from my thoughts is causing it to happen.

I use the positive energy to clear my spiritual energy, and I believe it works. It makes me feel good as I am doing it anyway, so I am getting something out of it! I always thank the pendulum afterwards, and through the pendulum I am thanking the universe.

I’ve mentioned my spells before, particularly the new job spell, that created three new jobs that did not exist before the spell was cast. Some would say this is just a coincidence, but with the way how spell casting works, and the power of threefold return, this seems to take the coincidence part out of the equation. Whatever you cast a spell for will return with the power of three. So I believe that the intent with spell casting must also be good – imagine the consequences of casting a spell that is not of good intent.

Some people need proof to believe things like this work, but I had the belief before. I certainly received the proof afterwards!

Cosmic ordering works the same way – believe in the outcome, believe we can receive what we order.

More reasons to help me to continue to feel good!